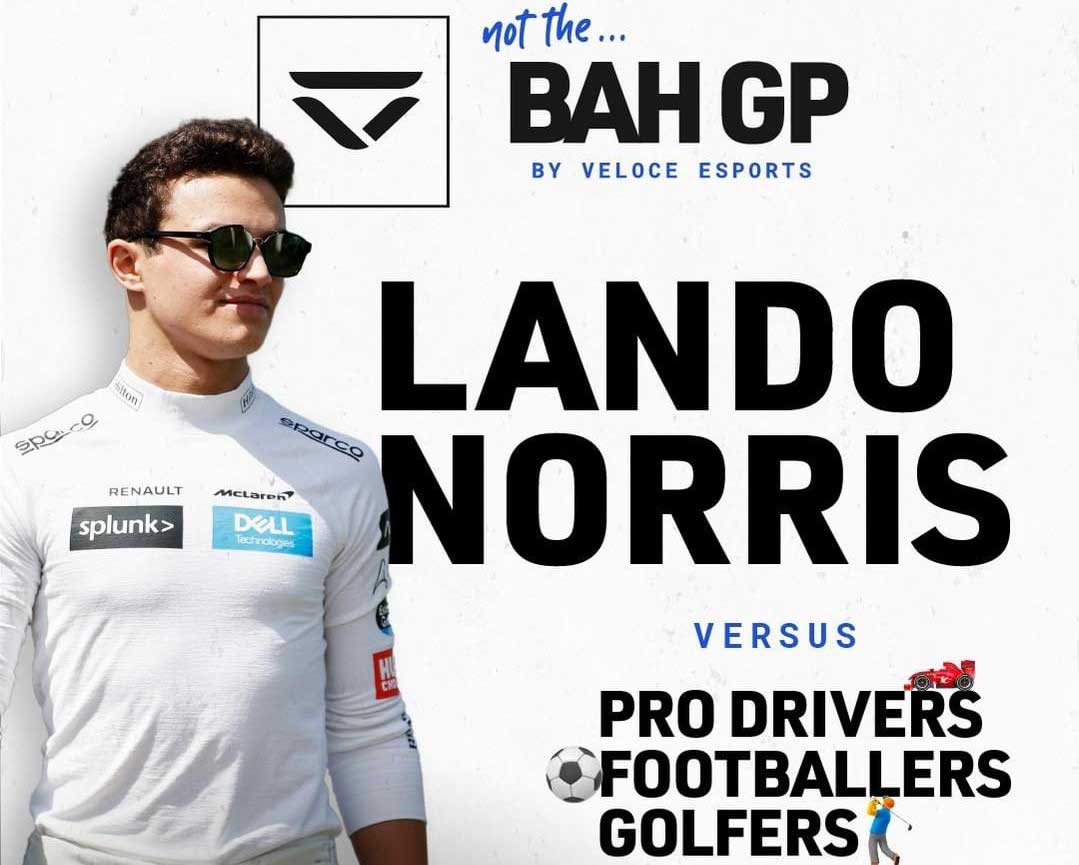 Veloce Esports Continues Gaming Revolution With ‘Not The Bah GP’

Following the huge success of the ‘Not the Aus GP’, Veloce Esports has announced the continuation of its esports events in-line with the original 2020 Formula 1 calendar, beginning with a virtual Bahrain Grand Prix titled ‘Not the Bah GP’ this Sunday (22 March).

Veloce Esports’ quick reactions in the aftermath of the cancelled Australian Grand Prix meant that keen gamers and Formula 1 fans alike were treated to motorsport action in the virtual sphere, filling the void left in the wake of the COVID-19 pandemic and breaking esports racing viewership records along the way. An approximate total viewing figure of 2 million and 170,000 concurrent viewers on the official livestream thrust ‘Not the Aus GP’ into the hot seat, trending at #2 on YouTube Gaming.

McLaren F1 ace Lando Norris is the first driver to be announced to contest ‘Not the Bah GP’, and the Briton will be looking to make amends after a qualifying blunder left him at the back of the grid for ‘Not the Aus GP’. Proving that he is just as skilled on the sim as he is in his real-world F1 car, the 20-year-old surged back through the field on an alternate tyre strategy en route to an excellent sixth place.

Joining Norris and other yet-to-be-unveiled sports stars, the ever-expanding driver roster due to compete virtually at the Bahrain International Circuit features a raft of returning YouTube influencers including ‘Aarava’, ‘Super GT’ and ‘Jimmy Broadbent’ to name but a few. All will participate remotely from their home-simulator set-ups in-line with current social distancing advice.

This weekend’s race format, however, has a twist. Drivers will take part in a 20-minute qualifying session at 18:00 GMT, before the initial quarter-distance race gets underway. Once the chequered flag has fallen for the first time, drivers will line up once more for an all-or-nothing quarter-distance reversed-grid race, in which the fastest drivers will have to fight their way to the front.

With more names from the worlds of football and golf soon to be revealed, ‘Not the Bah GP’ is guaranteed to be another crowd-pleaser. All of the action can be followed live via the Veloce Esports YouTube and Twitch channels, with the race set to start at 18:00 GMT. Keep up-to-date with all key timings and driver announcements via Veloce Esports’ various social media platforms.

“Going into this weekend and ‘Not the Bah GP’, I can’t wait to have another crack at what was an incredibly successful first event. We’ve got tonnes of amazing talent. Obviously having Lando [Norris] back in the frame is incredibly exciting — he’s one of the world’s most promising young Formula 1 drivers who’s also British and hugely popular from a digital standpoint. We hope to be able to engage a massive audience this weekend — it's about giving people some entertainment at quite a challenging time.

“We’re really excited about what is to come. Sunday will be another monumental day for Veloce Esports and again, we’re very proud to deliver a sporting show when there’s not going to be a huge amount going on in the real world. There are lots of exciting announcements still to come as far as participants go for this weekend’s race. Veloce is working round the clock to deliver the ultimate racing esports show and I really hope everyone enjoys it.”

“The #NotTheAusGP was such a huge success. Our team pulled it all together in 48 hours so it makes sense for us to continue those achievements with the #NotTheBahGP. I am really positive that this weekend's event will be bigger and better than the first with growing interest in esports taking this to the next level."