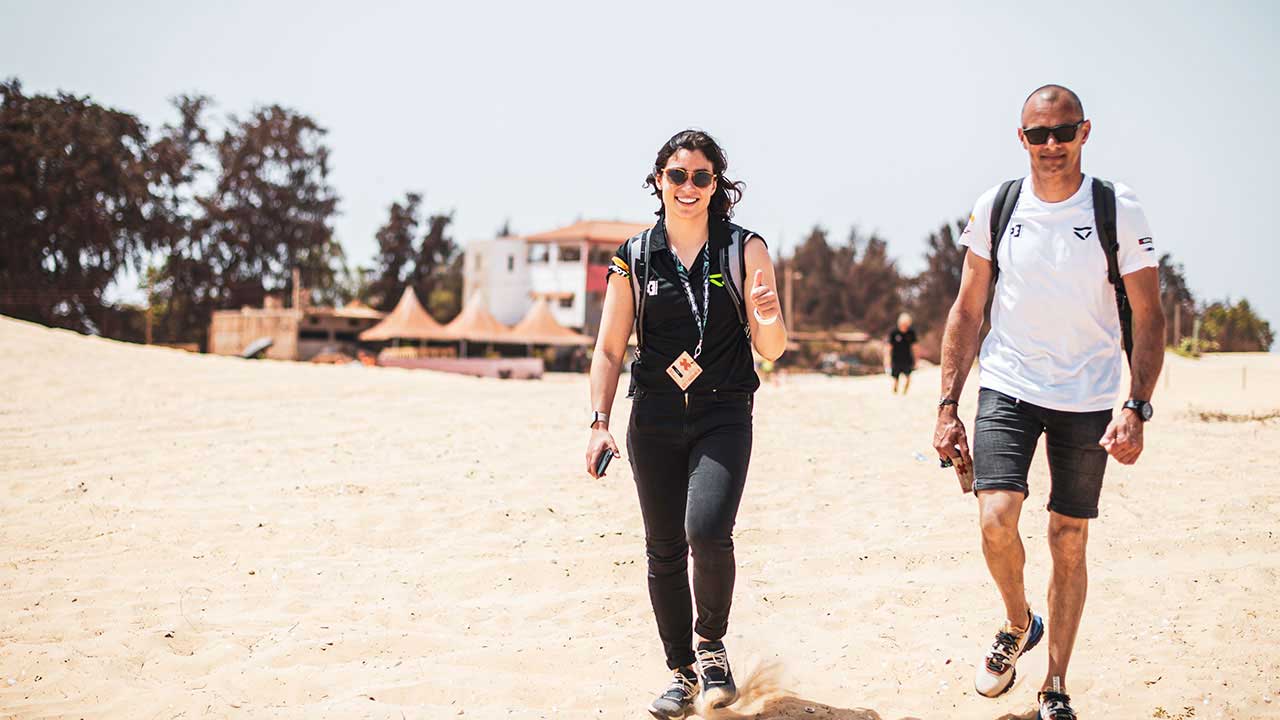 The who, what, when, where and why of the Ocean X Prix: Extreme E is back!

Race week is upon us once again in the all-electric, off-road SUV series, Extreme E. The team have arrived in Dakar, Senegal, the drivers are chomping at the bit to get behind the wheel of the ODYSSEY 21 once more and the course in Lac Rose is prepped ahead of the championship’s second race.

We wanted to give you, our fans all the information you need to get up-to-speed on this weekend’s Ocean X Prix.

18 of the world’s fastest drivers have assembled to form the grid for Extreme E’s Ocean X Prix.

As in Saudi Arabia over seven weeks ago, W Series Champion Jamie Chadwick and double Le Mans Series Champion Stéphane Sarrazin will be at the wheel of the Veloce Racing ODYSSEY 21 and are feeling quietly confident ahead of this weekend’s event.

The breadth and depth of talent on the Extreme E grid was highlighted during April’s Extreme E curtain-raiser – the Desert X prix – so the Veloce Racing drivers are under no illusions that this weekend will be just as competitive.

New for 2021, Extreme E is an innovative, off-road motorsport series that sees all-electric SUVs going wheel-to-wheel in areas that have been affected by climate change. Each race will feature two laps over 16 kilometres, with the male and female drivers taking an equal split of driving time – one lap each – swapping over at the halfway point.

The Saturday of each ‘X Prix’ will see the qualifying rounds play out from which the top three teams will progress to Semi-Final 1, the middle three squads heading to Semi-Final 2, with the final three outfits set to battle it out in the aptly named Shoot Out.

On the Sunday, the Semi-Finals, Shoot Out and Final take place. With an adjusted event format for the Ocean X Prix, the top two finishers from each of the Semi-Final progress through to the business end of the event. The all-important Final then takes centre stage as the X Prix culminates with a scintillating four-car showdown.

Game-changing features, GridPlay and Hyperdrive are also incorporated into the race format. GirdPlay allows fans to have a true impact on the result as they can vote for their favourite team and driver to be awarded with pole position for the final race of the weekend. Meanwhile, Hyperdrive gives drivers a surge of extra power for a fixed amount of time, once a lap during the race. New for the Ocean X Prix is the ‘Super Sector’ – the fastest driver through this section of course throughout the weekend earns five extra points for themselves and their team-mate.

All of the racing action will be broadcast around the world on a variety of networks, including ITV, the BBC iPlayer and Red Button application, Sky Sports and BT Sport in the UK, plus the championship’s official website.

For the Ocean X Prix, in Lac Rose, Senegal, we once again face a mostly sandy terrain, though a very different challenge and location to the deserts of Saudi Arabia. Here the race will take to the existing tracks surrounding the lake, named after, and renowned for its striking pink colour, caused by algae that thrives within its highly saline waters. The Ocean X Prix starts on the beach, running alongside the Atlantic Ocean which hugs the West African coastline.

Extreme E focusses on highlighting critical climate change issues around the world, with the aim of developing sustainable technologies. Gender equality is also at the forefront of the series’ agenda with each team running one female and one male driver.

Each X Prix has its own Legacy Programme that looks to leave a positive, lasting impact in each of the race locations. In Senegal, Extreme E aims to raise awareness of the environmental consequences of rising sea-levels, marine ecosystem degradation and desertification – worsened by overfishing and inadequate waste management.

The series is teaming up with local NGO Oceanium to plant one million mangrove trees in Senegal. The project will focus on five areas totalling 60 hectares, the equivalent of around 112 football pitches, with the aim of reforesting mangroves, providing education to local populations and improving social cohesion.