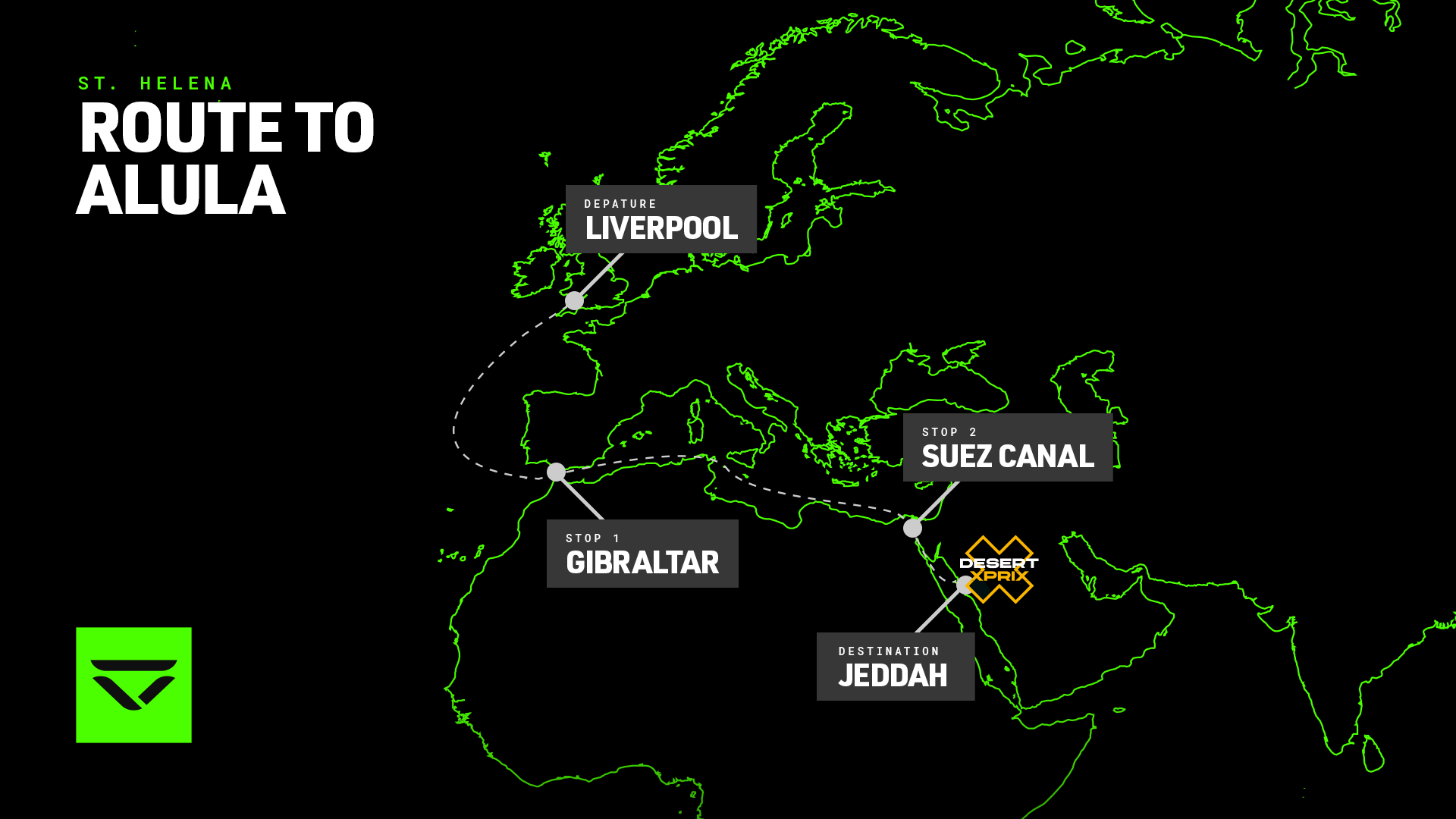 It’s been two years in the making but on March 13th the St Helena docked in Saudi Arabia ahead of the very first Extreme E race. Onboard were nine electric SUVs – specifically designed to tackle the wildly diverse terrains they will face during each of the five Extreme E X Prix’s, and all capable of launching from 0-62mph in 4.5 seconds – plus 50 members of crew, and Extreme E’s very own on-board science lab, where 14 of the world’s leading scientists will conduct key research, and support in the delivery of Extreme E’s five legacy projects.

The St. Helena, a former Royal Mail cargo ship, underwent a two-year makeover and received a multi-million-pound refit to transform her into Extreme E’s operations hub. She has been designed to transport everything the series needs, from the cargo and freight, to the crew and infrastructure. St Helena plays a crucial role in Extreme E’s mission to counteract climate change, through the use of renewable energy sources, and how they can be used to power a competitive racing series.

“Extreme E is a really exciting sustainability initiative and innovative, game-changing racing series. It’s great to be involved from the outset, and what makes it even more appealing to Veloce is its environmental focus, and how we can use racing to have a positive impact on the planet by working closely with climate experts to leave behind a positive legacy which goes far beyond the racetrack."

Before life at Extreme E, the St Helena was an ex-Royal Mail Ship, acting as a lifeline and supply ship to the island of St. Helena, a volcanic tropical island in the South Atlantic. She operated between the years of 1990 and 2016 and as a 30-year-old vessel, she required a large amount of modernisation before she could set sail with Extreme E.

“This has been a massive project and she is unrecognisable from when we purchased her back in 2018,” CEO and founder of the Extreme E Series, Alejandro Agag said. “She is unmistakably part of Extreme E with the exterior branding, and the internal refit looks incredible”.

The St. Helena plays a key role in minimising Extreme E’s emissions and carbon footprint. Her engines and generators have been fully refurbished and converted, allowing the ship to run on low sulphur marine diesel, known as ‘champagne’ in the industry, rather than the traditional heavy diesel that is commonly used. The St. Helena is also capable of running on one engine when cruising, helping to reduce fuel consumption and emissions. Plans to lower the water consumption and water heating requirements of the ship are also due to be carried out by using air-into-water-stream technologies.

The ship’s 30-year-old interior has all been kept, minimising waste and allowing Extreme E to remain as eco-friendly as possible. However, to improve aesthetics on-board, many of the interiors have undergone upcycling. Low-energy LED lights, chairs made from recycled plastic bottles, and low-water consumption bathroom fittings all contribute towards helping Extreme E to succeed in its sustainability mission. A hydroponic system, including an EvoGrow fridge, has been installed, allowing the onboard chefs to grow herbs and garnishes, making catering for the 50 members of the crew that will live and travel onboard the ship pretty easy. There are 62 cabins onboard that can sleep up to 175 people, two lounges, an 80-seater restaurant, and an 80-seater presentation area, that can be used for hospitality and entertaining visiting guests during the voyage.

Arguably the most crucial cargo onboard the ship is the fleet of all-electric race vehicles, the ODYSSEY 21 EVs, and the hydrogen fuel cells that will provide zero-emission charging for the cars. Also onboard are the tents that will act as the team garages during race weekends, tyres for all teams, the podium, TV and broadcast equipment, and even a machine that turns plastic waste into the all-important championship trophies.

St. Helena’s various refits and rejuvenation have transformed her into a truly unique, yet iconic ship, and have ensured she was fully equipped to set sail on her most ambitious adventure yet. As well as transporting the championship’s freight and infrastructure, she will also help to facilitate scientific research through an on-board scientific laboratory, a feature that Extreme E’s CEO and founder Alejandro Agag speaks proudly of:

“One of my favourite features of the ship is the creation of the on-board science laboratory, which replaces the original swimming pool, and I’m delighted that from Saudi Arabia we will have a variety of scientists onboard conducting oceanic research projects.”

Extreme E and Enel Foundation, the championship’s Founding Scientific Partner, have invited 14 scientists to join the voyage aboard St. Helena and form a scientific committee. They will conduct research and outreach programmes when sailing between race locations, focusing on understanding climate change and its consequences on the planet. They will also advise Extreme E on their five Legacy Projects and lead research activities across each of the ecosystems in which the series will race.

The St Helena set sail from Cammell Laird port in Liverpool in February with Extreme E Founder Alejandro Agag christening the ship by popping a bottle of champagne over the hull. The ship arrived safely in Jeddah, Saudi Arabia on March 13th, ahead of the inaugural Desert X Prix, which will take place on the 3rd and 4th April. She will then sail back through the Mediterranean Sea to Senegal for the Ocean X Prix. Following that she will cross over to Greenland for the Arctic X Prix, sail down to South America for the Amazon X Prix, and then further south to the final destination of Tierra del Fuego, Patagonia for the Glacier X Prix in December.

Extreme E races will not be open to spectators, but fans are encouraged to follow the action through live TV broadcasts, and various social media channels. Make sure you’re following Extreme E’s Impact Correspondent Izy Rekiel on socials, Izy, who will be living onboard the ship this year is also an environmental activist and international DJ.

“I will be the Jack of all things creative onboard St Helena; documenting life through social media and writing, helping define the sustainability mission of Extreme E and yes, DJing. I will be the ships outside link to the world. Extreme E is not just about awareness but implementing and inspiring action. We want to be more than just another warning campaign and drive people to change habits and lifestyle choices, as now more than ever what we do directly impacts our future and generations to come.”