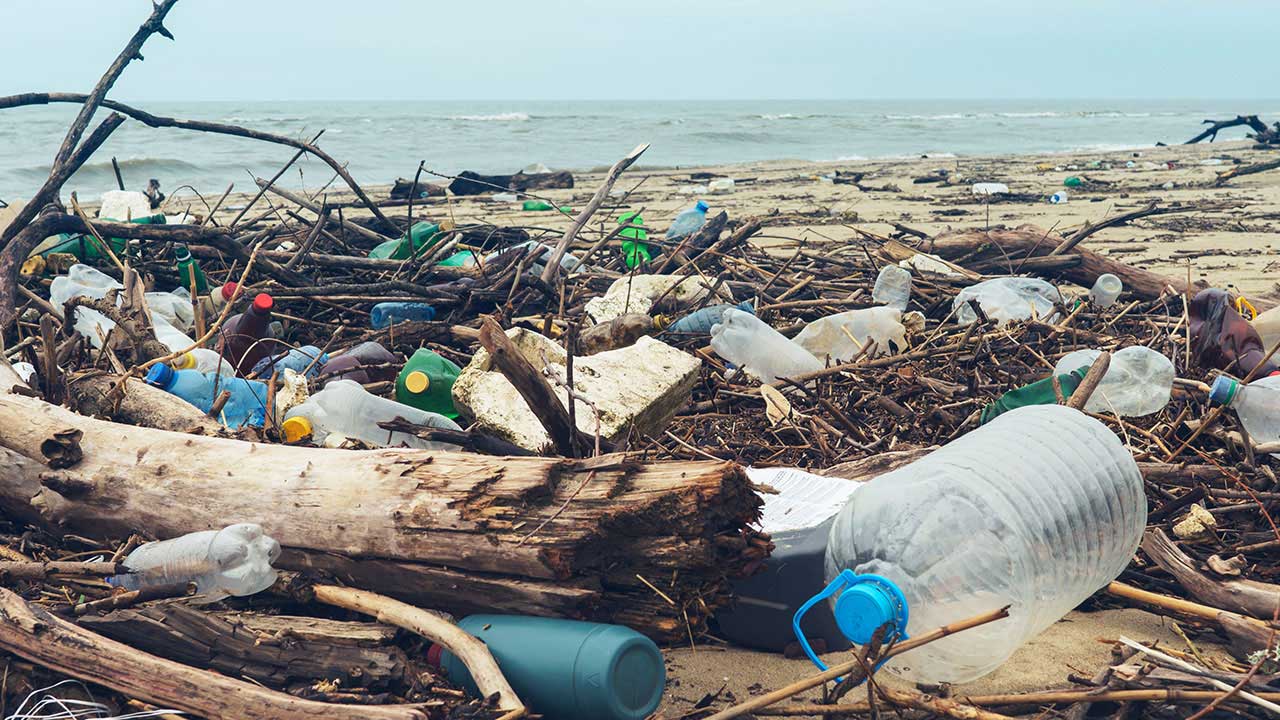 Is the world drowning in plastic?

The world’s oceans are in crisis due to climate change, with one of the main reasons being plastic pollution. There are some shocking statistics about the sheer amount of pollution in the world’s oceans, the harm it is doing to the planet and the species that live here…

12 million tonnes of plastic are poured into the ocean every year (Eunomia, 2016)

Plastics consistently make up 80 per cent of all marine debris studied (IUCN, 2020)

Based on models there may now be around 5.25 trillion macro and microplastic pieces floating in the open ocean, weighing up to almost 269,000 tonnes (Eriksen, 2014)

Approximately 5,000 items of marine plastic pollution have been found per mile of beach in the UK  (Marine Conservation Society, 2016)

Aldabra Atoll, a remote UNESCO World Heritage site is estimated to have one of the highest plastic accumulation densities for any island and to remove all the plastic will cost an estimated US$ 5 million (Burt et al. 2020)

But it isn’t just about where these plastics end up; it’s also about the impact on the environment from creating them in the first place. Producing one tonne of plastic generates up to 2.5 tonnes of carbon dioxide, in part because 90 per cent of plastic is being produced from raw materials obtained from fossil oil and gas. And with predictions that plastic production will grow by 60 per cent by 2030 - and treble by 2050 - the future is looking bleak.

So how do plastics get into the ocean? Sadly, it is a much wider issue than people simply throwing them in there. Ineffective waste management comes into play - using rivers as dumpsites, sending waste to countries that can’t deal with it and discarding broken fishing equipment from boats.

Extreme E caught up with Sheena Talma, their marine scientist representative who will be joining the team at the Ocean X Prix at Lac Rose, Dakar, Senegal at the end of the month, and who has been part of an array of studies including one into the cost of plastic pollution clean ups for remote islands.

When asked about the consequences of plastic pollution on marine life and humans, Sheena says: “We do not know the full scale of it yet. But we do know that plastic can cause animal deaths through ingestion and entanglement. The classic examples include turtles eating plastic bags or fish, whales and birds getting tangled in discarded fishing nets. We do not know whether ingested plastic in fish has an effect on our own health but I imagine it’s probably not what you want going into your fish - you wouldn’t feed cattle plastic, after all.”

Not only does plastic pollution affect the marine environment, it also threatens ocean health, food safety and quality, human health, coastal tourism, and contributes to climate change.  Of course, the most shocking and disturbing impacts of marine plastics are the ingestion, suffocation and entanglement of hundreds of marine species who mistake plastic waste for prey, with most dying from starvation as their stomachs fill with plastic debris. They also suffer from lacerations, infections, a reduced ability to swim, and internal injuries. In addition to that, plastic - which is a petroleum product - also contributes to global warming. If plastic waste is incinerated, it releases carbon dioxide into the atmosphere which increases carbon emissions.

But it isn’t all doom and gloom. People are standing up and taking notice of the issue, and everyone has the power to make small changes that make a big difference. Otherwise, that shocking statistic of plastic pollution growing by 60 per cent by 2030 will be a harsh reality the world cannot afford.

Sheena outlines some of the steps we can all take: “Lobby your government and large companies to make change, especially if you’re based in a more developed country. Also think about your plastic habits in the home. If you can afford it, try to purchase materials not made of plastic but that can be reused, or look at refillable cleaning products for example.

“And if you’re taking those steps, shout about it! You can join up to things like the Extreme E Count Us In Challenge that empowers people to make a difference and, in the long-term, lobby government.”

And the Senegalese government certainly have taken notice. Senegalese President Macky Sall has said in the past: “I want Senegal to be identified as one of the cleanest countries in Africa.” Back in 2015, his administration took action banning thin polythene bags.

There are also companies out there using new technology to tackle the problem. One of those is Polymateria, a UK-based company which has created the world’s first plastic with time-controlled open-air biodegradability that will return quickly and safely to nature if it ends up in the natural environment, while also allowing for recycling to happen. These products will be used at all Extreme E X Prixs.

Another is Solgaard that that was founded by Canadian-Norwegian entrepreneur Adrian Solgaard. His and the company’s mission is to utilise ocean-bound plastic in its range of premium, yet sustainable travel products. The company guarantees that for every one of its products sold, it prevents 229 plastic bottles from ending up in the world’s waters, and it has been kind enough to give the Extreme E team luggage to support them on their global travels.

When asked how important these types of innovations are, Sheena says: “A circular economy is vital for our own survival. Building material that lasts or that can be repurposed is one way of ensuring that we do not mismanage our resources. Polymateria is a great example of an organisation that wants to see change and is actively taking a role to help solve the issues of single-use plastic.”

So next time you purchase a plastic bottle of water, another cleaning product or don’t recycle, think about where that ends up and the harm it is causing.