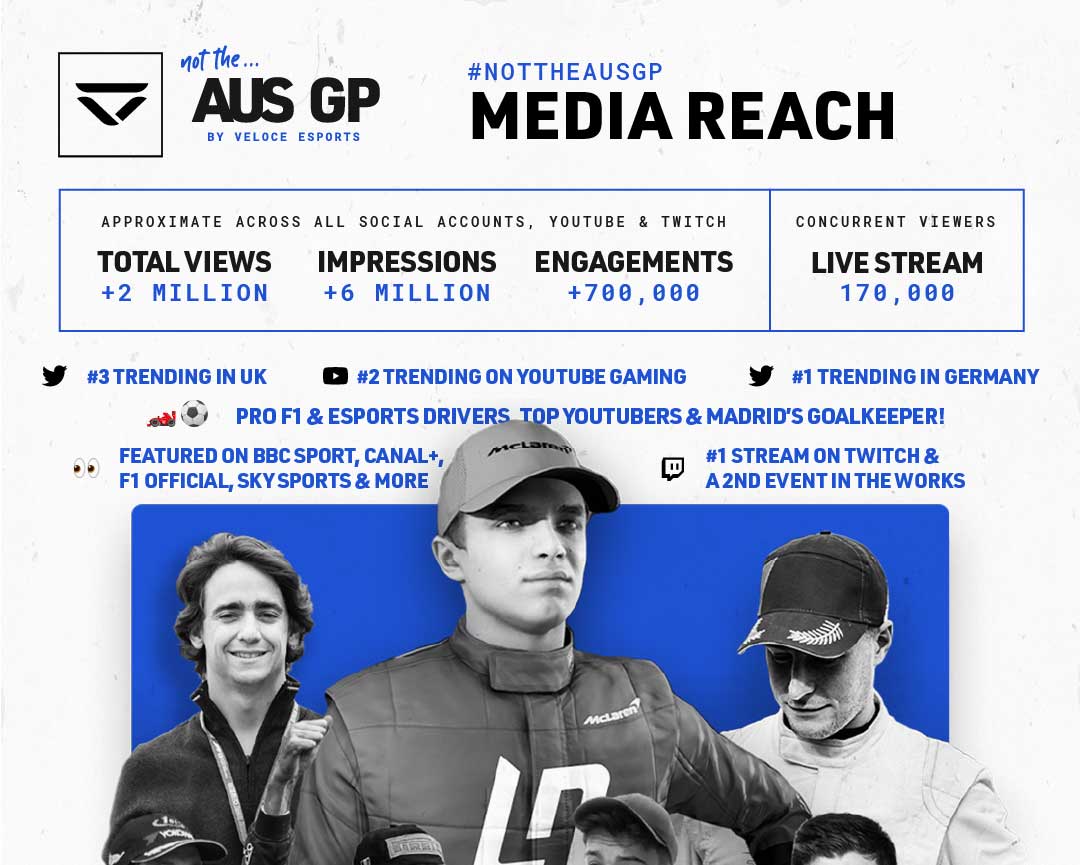 F1 Stars, Gamers And Football Legend Thrill Fans And Break Records In 'Not The Aus GP'

Lando Norris, Stoffel Vandoorne and Esteban Gutiérrez spearheaded a star-studded virtual Australian Grand Prix yesterday (15 March), as some of motorsport’s biggest names found a way to continue competing despite the cancellation of the Formula 1 season-opener – with the broadcast breaking records as the most-watched esports race ever.

When the escalating global COVID-19 pandemic forced the Australian Grand Prix to be called off late last week, leading esports organisation Veloce Esports immediately sprang into action to ensure spectators would still have a race to watch.

After pitching the idea to McLaren Formula 1 ace Norris – a keen gamer himself – a plan was hatched, with Formula E racer Stoffel Vandoorne and Mercedes F1 test-driver Esteban Gutiérrez quickly pledging their support.

Proving esports’ cross-discipline appeal, Real Madrid goalkeeper Thibaut Courtois also joined the line-up, alongside leading YouTube influencers ‘Aarava’ and ‘Tiametmarduk’ and some of the world’s highest-profile gamers, all of whom participated remotely.

The half-distance GP – dubbed ‘Not the Aus Grand Prix’ – was streamed on the Veloce Esports YouTube and Twitch platforms, achieving a concurrent live viewership of 170,000, more than two million total views and a staggering six million social media impressions. It was the top-trending topic on Twitter in Germany and third-highest trending in the UK. Norris’ own Twitch stream was the most-watched in the world yesterday, attracting 70,000 live viewers.

After 29 laps of Melbourne’s Albert Park Street Circuit, it was F1 Esports driver Dani Bereznay that took the chequered first, with James Baldwin – the ‘World’s Fastest Gamer’ – placing fourth and Norris charging through the field from 19th to sixth following a disqualification in qualifying.

The virtual action will continue this coming Sunday (22 March) around the Bahrain International Circuit in place of the postponed Bahrain Grand Prix, with participants due to be confirmed over the following days. Keep up-to-date with all key timings via Veloce Esports’ various social media platforms.

“Once the opening grands prix were either cancelled or postponed, the whole team at Veloce got together and discussed the possibility of arranging an event that would fill the gap for motorsport fans. We came up with the ‘Not the Aus Grand Prix’ concept, which we felt set the tone. We wanted to use the F1 game because we felt it was accessible and after our Co-Founder, Jean-Éric Vergne, put out a feeler on his social channels, we felt like the appetite was there.

“There’s clearly always a competitive element, but most of all we wanted something where the audience could tune in and truly interact. The Veloce team pulled together massively to make it all happen, and we managed to get some fantastic people on-board. It was obviously great to get Lando involved, and to have the number one Twitch stream in the world and be trending across Twitter was a very proud moment for us all.

“It was also great to bring together such a diverse group of individuals appealing to diverse audiences, from YouTube celebrities to the Real Madrid goalkeeper all the way to Stoffel Vandoorne and Lando Norris. The feedback has been fantastic, so I would definitely urge everyone to watch this space for further announcements over the coming few days...”