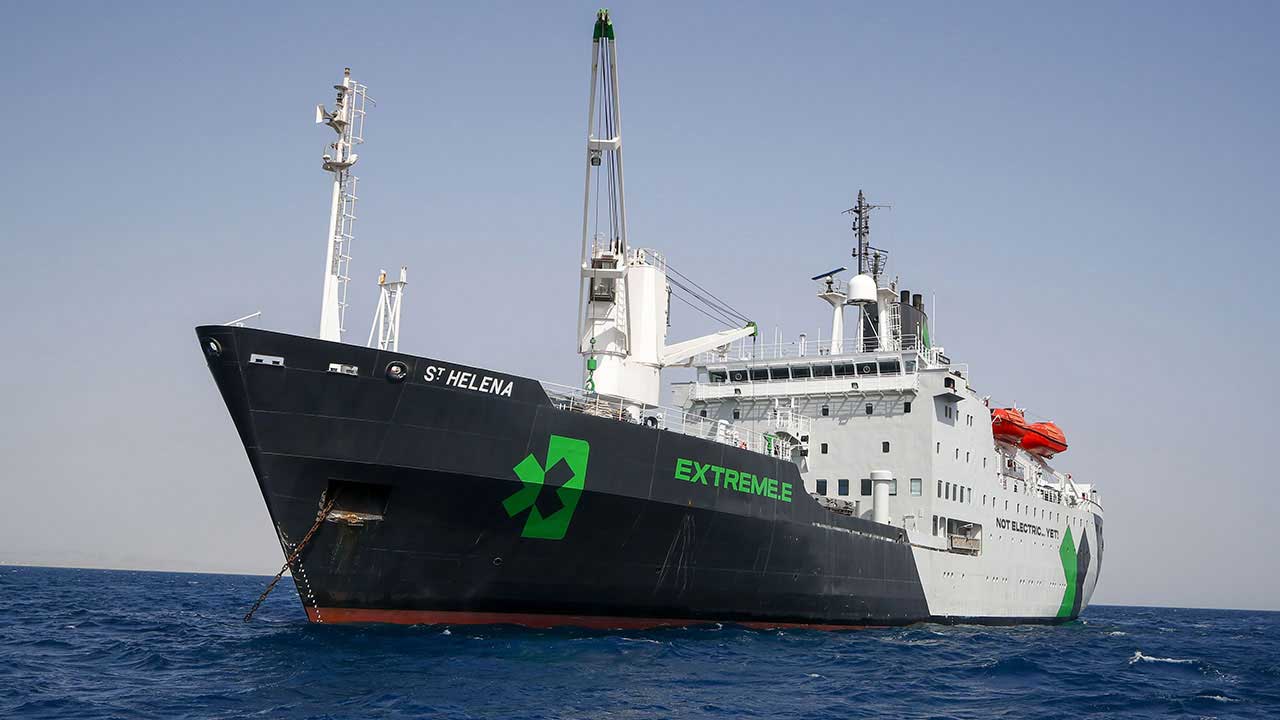 Today, Extreme E’s floating centrepiece – the St. Helena – has arrived in Senegal for its second X Prix – the Ocean X Prix - taking place at Lac Rose, Dakar from 29 – 30 May.

The St. Helena, Extreme E’s repurposed former Royal Mail Ship, arrived at Dakar port, having travelled for over four weeks from Extreme E’s championship opener in Saudi Arabia.  Her epic journey has taken her across the Mediterranean Sea, through the Suez Canal, via Valencia then Gibraltar to finally arrive on the West coast of Africa.

Alejandro Agag, Founder and CEO of Extreme E said: “I’m pleased to see that the St. Helena has arrived safely and on schedule in Dakar - her second voyage as Extreme E’s floating centrepiece is complete.

“St. Helena’s safe arrival means we can now focus on preparing for the Ocean X Prix later this month, and the next phase of our Legacy Programme, which includes the planting of one million mangroves along the West African coastline. As well as bringing our fantastic electric racing series to a place with such a legendary motorsport history, Extreme E aims to shine the spotlight on the environmental challenges that Senegal is facing as well as helping local communities.”

Whilst at port in Valencia, the St. Helena collected some important cargo including AFC Energy’s first upstream green hydrogen fuelling solution.  This will work alongside its existing hydrogen power system to charge Extreme E’s fleet of ODYSSEY 21 vehicles at the Ocean X-Prix. In addition, sustainable power solutions company Zenobe loaded a second-life battery on to the St. Helena, which will be used to power Extreme E’s paddock operations, once again reducing overall emissions.

And that’s not all. Whilst in Valencia, car manufacturer, CUPRA was also able to load one of its Formentor e-HYBRIDs -  this exciting new model has only been on the market since March, and this one will be used to transport Extreme E’s personnel to and from site at Lac Rose.

The repurposing of the St. Helena has been a huge project for Extreme E. Since her purchase in 2018, she has had a complete internal refit. In addition to building a science laboratory, there are 62 cabins on board which can sleep up to 165 people, two lounges, an 80-seater restaurant, a 100-seater exterior deck, an 80-seater presentation area plus capacity to carry 90 20-foot shipping containers. The ship uses low-energy LED lights, has low-water consumption bathroom fittings and chairs made from recycled plastic bottles, collected from the Mediterranean. There is also a hydroponic system on board in the kitchens which enables the Chef to grow the ship’s own herbs and garnishes.

The cargo will now be unloaded and transported to Lac Rose in Dakar, Senegal ready for the Ocean X Prix which takes place from 29-30 May.

For more images head to @izyofficial on social media.