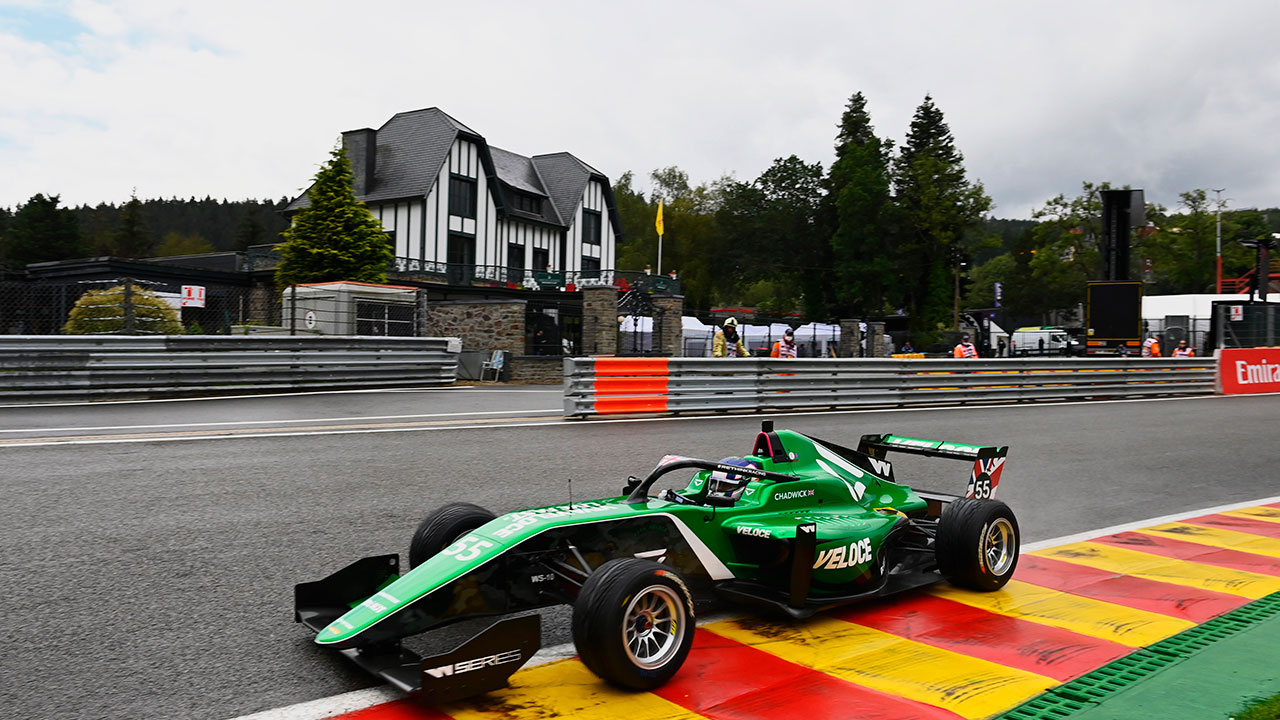 W Series returned from its summer break today (27 August) with practice and qualifying getting underway at the iconic Spa-Francorchamps circuit. After some much-needed time off, the Veloce Racing drivers were refreshed and ready to set some red-hot lap times in the traditional Belgian mixed conditions.

Jamie Chadwick started the day as she meant to go on, hitting the top of the timesheets in the initial free practice session, while Bruna Tomaselli set the 12th quickest time before earning herself a two-place grid penalty for a pit-lane infringement.

A turbulent start to the all-important qualifying session saw the field complete just one lap before an alarming six-car incident at Eau Rouge brought out the red flags, leaving Chadwick in fourth and Tomaselli 15th.

Mercifully, all of the drivers involved avoided any serious injury and the session got back underway. In the middle stages of qualifying, the reigning champion and Emma Kimiläinen would trade times at the top of the table before the Finn dropped out of contention.

Tomaselli, meanwhile, set a lap time that would propel her into ninth place, before the Brazilian rookie was caught out in the mixed conditions, taking a trip through the gravel trap at Campus corner on the far end of the track.

Chadwick would eventually stamp her authority on the circuit nestled in the Ardennes hills with a lap time 2.8 seconds quicker than her closest competitor. Title rival Alice Powell would eventually reel in the Veloce Racing driver bringing the gap to within one-hundredth of a second with three minutes on the clock.

The 23-year-old was on a charge, however, and with Powell getting caught in traffic on her final laps, Chadwick stretched her legs to go seven-tenths clear finishing the session with her third pole position of the season.

Tomaselli recovered well from her earlier excursion to claim the 10th fastest time, translating to 12th on the grid – after her penalty is applied – for tomorrow’s race.

Fans can watch all of the W Series action unfold live on Channel 4 from 15:00 BST. For more information visit the W Series website.

“Firstly, it is so important to see that everyone walked away from that incident at Eau Rouge. Its never nice to see a crash but one at that speed and with that many drivers involved, it’s a real heart-in-mouth moment so it’s great that everyone had the all-clear.

“What an incredible feeling! Spa-Francorchamps is not only an amazing track but it is also hugely challenging so to get pole here is really special. Emma [Kimiläinen] and Alice [Powell] pushed me really hard today so I know we’re going to have our work cut out for us in the race tomorrow, but I’m ready for a good battle!”

“I’m pleased to see everyone walked away from the crash OK – that was a big one! The conditions were really tricky in this session and that was highlighted by the mistakes we saw, including my own at the far end of the circuit.

“It’s disappointing to have the penalty but I feel like 12th is an OK starting point, Spa is such a great track and you can get some overtaking done on the long straight up to the chicane so I already have a game-plan on how to move up in the race!”

“What a session! Obviously, we’re all grateful that there were no serious injuries in that huge crash at Eau Rouge. Jamie [Chadwick] masterfully navigated the treacherous conditions to take another dominant pole while Bruna [Tomaselli] did brilliantly to get into the top ten.

“The race tomorrow is going to be a challenging one. No one knows what’s going to happen with the weather at Spa from one moment to the next and the track itself is a real challenge but with the form our drivers are in at the moment, I’m sure we’re going to see something special once again!”