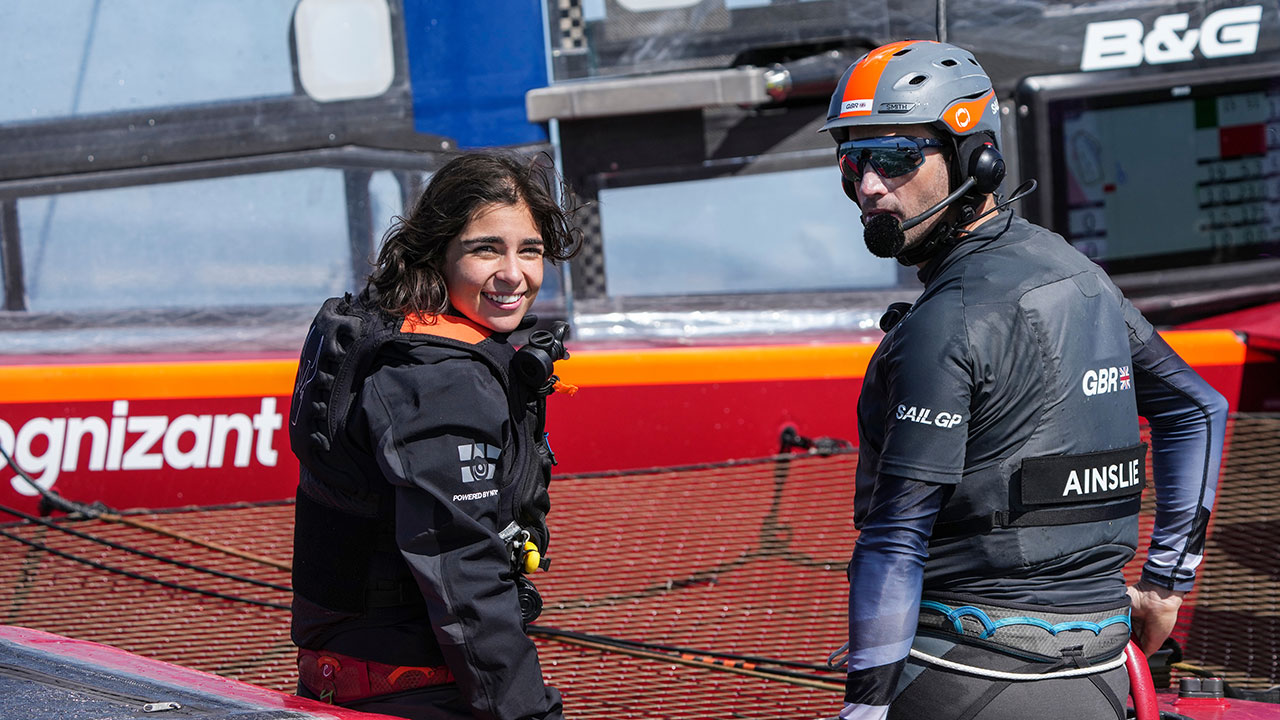 Veloce Racing’s Jamie Chadwick joined the Great Britain SailGP Team today in Cádiz, Andalusia, during practice for this weekend’s Spain Sail Grand Prix. The 23-year-old’s visit to the sixth event of the season coincided with a milestone moment that will see the league’s women’s pathway program athletes racing for the first time ever – which Chadwick was only too happy to endorse.

Four-time Olympic sailing champion Ainslie and the British SailGP squad welcomed the 2019 W Series champion to become its sixth sailor for the day, on the state-of-the-art foiling F50 catamaran and Chadwick, unsurprisingly, took to sailing like a duck to water.

Chadwick’s appearance at SailGP coincided with the announcement that female athletes will compete onboard the high-speed F50s for the first time.  Designed to create a sporting championship that has gender equity, the Women’s Pathway Program was launched at the beginning of the season to encourage more female participation within the sport, reminiscent of W Series joining the Formula 1 support bill for 2021.

In Cadiz, the British SailGP crew will be joined by a new team-mate, as the double Olympic champion Hannah Mills is set to become one of the first female athletes to race in SailGP when she joins Ainslie and the Great Britain SailGP Team as a sixth sailor.

During Chadwick's visit to Cádiz, the Bath-born ace also spoke at SailGP’s thought leadership event Champions for Change along with Veloce Racing CEO Daniel Bailey. The pairing offered their thoughts on gender equality, innovation and sustainability in the industry, providing a fresh perspective and inciting extensive discussion.

Jamie Chadwick, Driver, Veloce Racing commented: “What an experience! It’s been great to spend time with the team and learn how a professional sailing squad operates. Of course, you draw comparisons to motorsport teams, it’s really interesting to see the different approaches to competing.

“I’m also really pleased to see the Women’s Pathway Program reaching such an important milestone here this week. It’s so important for all sports to recognise gender equality and bring it to the forefront of conversations.”

Ben Ainslie, CEO & Driver, Great Britain SailGP Team said: “It was awesome to have Jamie sail on the F50 with us here in Cádiz. Her experience in motorsport really transitioned well with the speeds we can reach out on the water and how dynamic the SailGP boats are. Jamie was fearless and by the end of the session she was steering the boat at closing speeds of 90km/h that takes a lot of skill and guts.”

Daniel Bailey, CEO, Veloce Racing added: “We’ve loved every minute of this weekend. A big thank you to SailGP and Great Britain SailGP Team for making us feel so welcome here in Cádiz.

“It was also amazing to be a part of the Champions for Change side of the event. It’s always useful to hear other people’s experiences from outside of your own industry. Often, a fresh set of eyes will look at your challenges from a different angle and help drive things forward.”