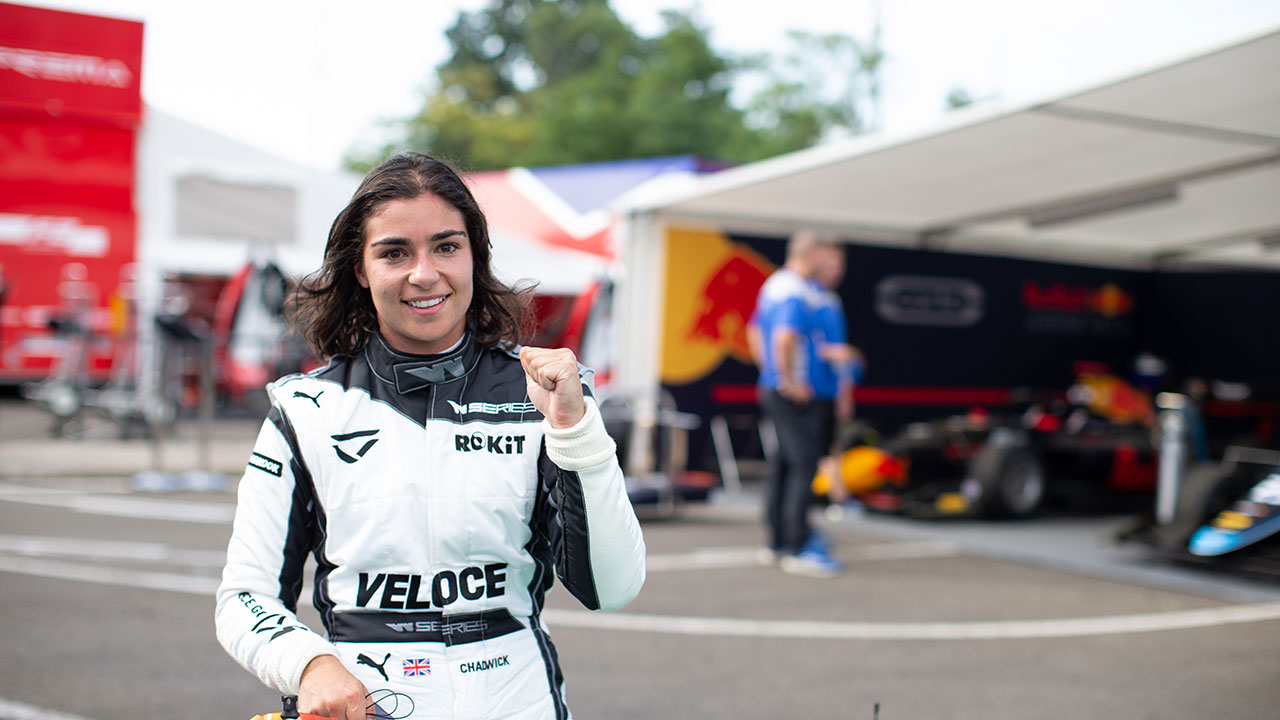 Veloce Racing driver Jamie Chadwick has been in a class of her own since W Series first hit the track in this morning’s practice session and did well to carry that form through to qualifying this afternoon. Brazilian Rookie Bruna Tomaselli also put in a strong performance at the iconic Hungaroring circuit just outside of Budapest.

The reigning champion wasted no time in throwing down the gauntlet in Hungary, setting an impressive lap of a 1:43:317 – seven tenths clear of the chasing pack.

In qualifying, the 23-year-old wouldn’t have it all her own way. Several drivers hit the front as lap times tumbled throughout the session. With 12 left on the clock, Tomaselli set a blistering lap to join Chadwick at the top of the timesheets in second.

As the final runs began, the Veloce duo would be pushed hard by the likes of Beitske Visser and Nerea Marti before the #55 driver stretched her legs to go over half-a-second quicker than anyone else, highlighting her pace in the middle sector.

Championship leader Alice Powell would inevitably be the one to pile on the pressure in the closing stages of qualifying, coming within two tenths of the top spot.

Despite the advances of her rivals, Chadwick would not be denied her second pole of the season, setting the stage perfectly for turn one in tomorrow’s race as the 2021 title protagonists go head-to-head.

Tomaselli, meanwhile, continued to impress and went on to claim sixth on the grid – the second time she has made it into the top ten during her rookie season.

“I’ve felt great in the car from the moment I left the pits in practice. I can’t put it down to just one thing, everything seemed to come together and work in harmony.

“The middle sector is definitely where I feel the difference is being made. It’s arguably the hardest part of the track but I really enjoy the challenge as the corners come at you thick and fast.

“It’s going to be really interesting to see how tomorrow plays out. Obviously I’m alongside Alice [Powell] who’s slightly ahead on points in the championship, so I’m sure neither of us will give an inch going into turn one!”

“This is a great result considering where we were in practice. We worked on the setup and that gave us some extra pace but I think going out in free air while everyone else was in the pits was a brilliant strategy.

“It’s a shame we weren’t able to hang on to the front row slot but the field is very competitive and small margins make a really big difference.

“This is my first time at the Hungaroring and I think it’s a brilliant track. I’ll be pushing to move forwards tomorrow, but I’d be really happy to get some more points on the table both for myself and the team.

“What a fantastic result and team effort for Veloce Racing today. Jamie [Chadwick] is clearly very hungry to get that championship lead back from Powell so it’s going to be great to see those two go wheel to wheel tomorrow.

“Bruna [Tomaselli] continues to impress, not just Veloce but the entire paddock in her rookie season of W Series. A clever strategy to get some free air ensured she was in the mix at the front and she was looking really competitive against the rest of the field.

“Of course, tomorrow is the important day but I think we’ve put ourselves in a great position to pick up some big results tomorrow.”