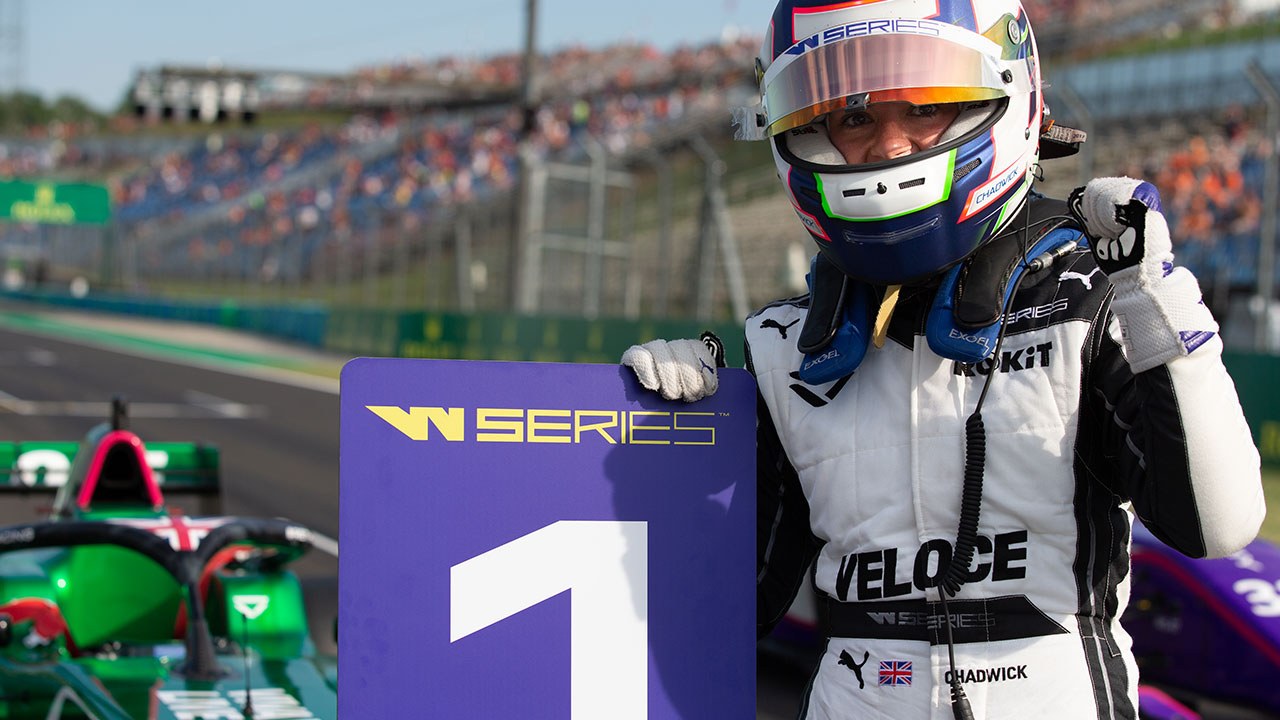 Jamie Chadwick stamped her authority on the Hungaroring today (31 July) with a dominant display to retake the lead in the championship, while team-mate Bruna Tomaselli recorded her second top ten finish of the year capping off another successful weekend for Veloce Racing.

Round 4 of the 2021 W Series championship would be a straightforward race from Chadwick’s perspective. The 23-year-old completed her second grand slam of the season topping yesterday's qualifying session, leading every lap of the race, setting the fastest lap time and eventually taking the win.

The reigning champion got a perfect launch off the line, enjoying a clear run into turn one and she didn’t look back. Title rival Alice Powell would hold the gap at around two seconds during the opening stages of the race but Chadwick began to extend her advantage, setting fastest lap after fastest lap and by the flag, a 10-second gap underlined her untouchable form this weekend.

Tomaselli, meanwhile, would bolster her impressive qualifying performance with a second points-scoring result of the season. The Brazilian would lose places off the line but quickly settled into a rhythm and consolidated her place in the pack.

With 20 minutes of the race remaining, Tomaselli piled on the pressure as she engaged in a tense tussle with Belen Garcia for eighth. The rookie eventually conceded the position and crossed the line in ninth adding to her points tally and elevating her to 10th in the overall standings.

W Series enters its summer break with one point separating title rivals Chadwick and Powell and the duo 35 points clear of their nearest rival. An intriguing four-race showdown awaits as the championship heads to Spa-Francorchamps (27-28 August), Zandvoort (3-4 September), Circuit of the Americas (22-23 October) and the season finale at Autódromo Hermanos Rodríguez (29-30 October).

“What a weekend. I knew we’d be in the mix here in Budapest but I didn’t expect that result. Alice [Powell] drove brilliantly and she pushed me all the way. This sets us up for a great battle in the second half of the year with just one point between us.

“It’s great to see Bruna [Tomaselli] getting points today as well. She’s doing a great job in her rookie season and I really enjoy working with her during the race weekends.

“This is another great day for W Series as a whole and the Veloce Racing team. It’s the perfect way to sign off before the summer break, I’ll take some time now to relax and prepare to attack these next four races head on!”

“It was great to pick up some more points today but still a little disappointing to lose those positions at the start. I definitely had the pace to run in the pack and hold my position but these things happen sometimes.

“Once I settled into a rhythm I started to put the pressure on Belen [Garcia], but she drove well and I couldn’t get the job done. We had a good race and I enjoyed the weekend as a whole – the Hungaroring is a great track.

‍
“A big congratulations to Jamie [Chadwick] and the team on the win and the championship lead. The rest of the season is going to be really exciting – I want to keep pushing to improve and hopefully get my first podium!”

“It’s another incredible day for Veloce Racing. Jamie was untouchable from the word go this weekend and I think it was the perfect way for her to retake the championship lead in such dominant fashion.

“Bruna did a great job today as well. Considering this is her rookie season I think sixth on the grid was an incredible effort and to get her second points-scoring finish just shows how much she is improving as the season progresses.

“I can’t wait to see how they both do at Spa at the end of August. They’ve been performing at such a high level during a busy period of the season so a bit of time to recharge their batteries should give them even more of a boost!”