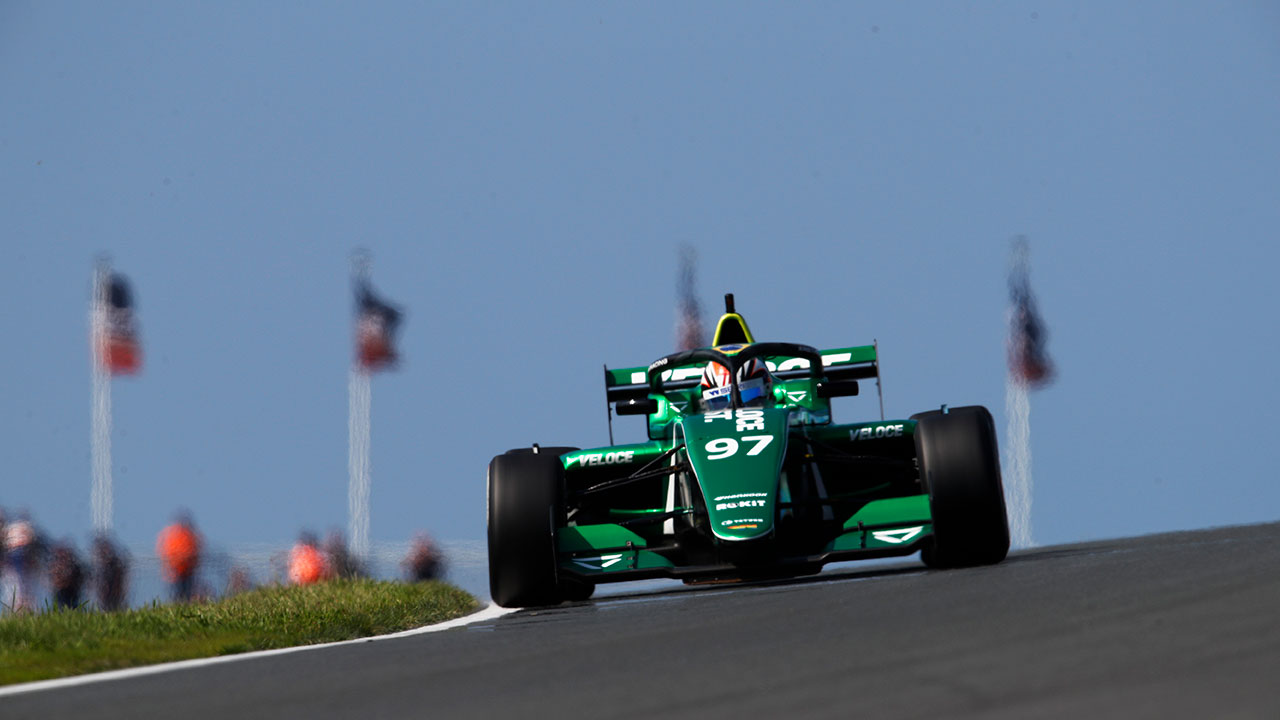 Chadwick qualifies third in the Dutch dunes with Tomaselli 14th

Part two of the W Series double-header got underway today (3 September), with the opening practice session and grid-deciding qualifying runs at the newly re-profiled Zandvoort circuit in the Netherlands.

The circuit's technical and unforgiving nature meant several drivers were caught out by the ever-present banking, barriers and gravel traps – features that are so often absent from modern motorsport venues.

Following a timesheet-topping appearance in practice earlier in the day, Jamie Chadwick’s hopes were high as she made her way out onto the 4.259-kilometre course alongside rookie team-mate Bruna Tomaselli.

The reigning champion was quick to back up her formidable practice pace, setting the fastest lap early on in the 30-minute qualifying session. Her charge was swiftly halted however when Fabienne Wohlwend spectacularly clattered the barriers at the ominous Turn 3 to bring out the red flag for the first time.

With 24 minutes remaining, the all-female field returned to the track once more. Chadwick’s pace was on the money as she bested her own fastest lap on several occasions, but the ever-present Emma Kimiläinen was never far behind.

Fellow Veloce ace Tomaselli spent much of the session on the fringes of the top ten, with her position ebbing and flowing throughout as she responded to the pace of her rivals with faster lap times.

As the clock ticked down to just six minutes, Chadwick’s season-long title rival Alice Powell seized the advantage and moved into a provisional pole position. Meanwhile, another red flag meant proceedings were disrupted for a second time as Sabré Cook beached her car in the gravel at Turn 12.

Once restarted, the session reached fever pitch with both Chadwick and Tomaselli improving their lap times. Ultimately, the Brit would concede the front row to Kimiläinen and Powell respectively, lining up third for tomorrow’s race while Tomaselli ended the session 14th.

Fans can watch all of the W Series action unfold live on Channel 4 from 15:00 BST. For more information visit the W Series website.

“What a battle we had out there today. Emma [Kimiläinen] and Alice [Powell] did an incredible job as they have done all season, but I’ll definitely be looking to give them a hard time tomorrow!

“This title battle is really hotting up now. Its great to have the three of us separated by such small margins and I’m hoping we can carry that over into the race and put on a good show.”

“It was a tough qualifying session out there today. It’s a shame that there were so many red flags as each time the session was stopped, I felt like I was really in a good rhythm and I was going to make some progress.

“Tomorrow I’ll of course be looking forward and hoping to make up places. I think it’s going to be quite challenging to overtake here but I think if you get the job done that will make it even more satisfying.”

“What an exciting race we have in prospect. The top three in the championship lining up in reverse points order – I can’t wait! Obviously, we’d all sleep easier if we were on the front row but Jamie [Chadwick] is still in a great position for the race and the championship.

“It’s going to be really interesting to see what progress Bruna [Tomaselli] can make tomorrow. As only the second race of the weekend, we’re going to be in some unknown territory in terms of overtaking and race strategy, bring on tomorrow!”